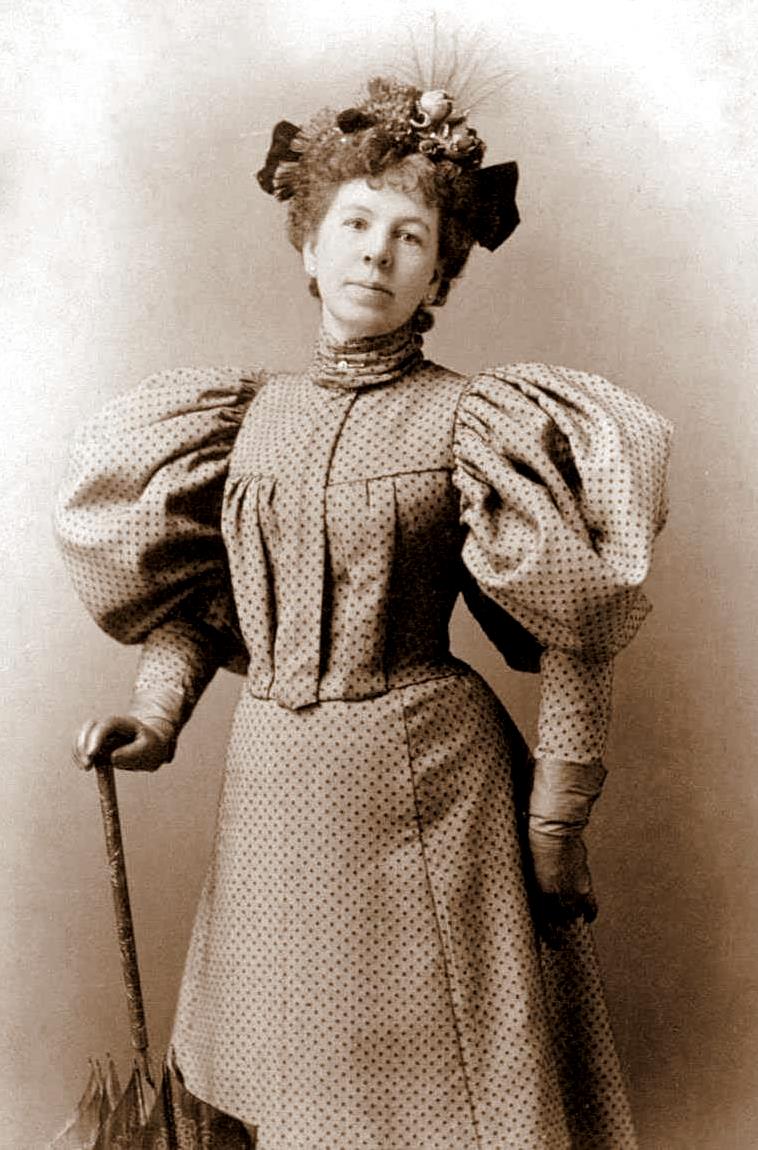 Clara S. Foltz was born in Henry County, Indiana, noted to be of a family that produced several lawyers and preachers, and claimed to be a lineal descendant of Daniel Boone. At the age of 15, she married Jeremiah D. Foltz, and some years later after a farm life in Indiana, they moved to California in 1872. Seven years after she married Jeremiah Foltz, Clara Foltz had given birth to three of her five children (two small children and an infant) when her husband, desperate for work, left for Oregon.

To support her family, Foltz started a dressmaking business. However, when the local sheriff took her sewing machine to pay her husband’s debts, she was unable to secure an attorney to argue her case. Foltz found her intellect and passion merged when life events lead her first to the women’s suffrage movement and later into law.

Foltz was pregnant with her fifth child when she and her family moved in 1875, to San Jose. Soon after their move, her husband abandoned Foltz and the children for another woman, taking with him what little money they had to spend on his train fare to Oregon. Foltz divorced him and took sole custody of their five young children, an arguably rather rare occurrence in 1875. As the sole breadwinner for five children, she began earning speaking fees, lecturing on suffrage.

Determined to earn a better living, and consistent with her personal beliefs on women’s rights, she began reading law books at the office of Hon. C. C. Stephens in San Jose. Foltz soon discovered the only prerequisites to joining the California State Bar were that an applicant be a 21-year-old white male citizen of good moral character and possess the necessary “learning and ability.”

Foltz and fellow suffragist Laura deForce Gordon, publisher of a small newspaper in Northern California called the Stockton Weekly Leader (also known for giving the first suffragist speech in California on February 19, 1868), drafted the “Woman Lawyer’s Bill,” substituting “any citizen or person” for “any white male citizen” in the state code provision, C.C.P. 275. If passed, the bill would thereby permit women to practice law. Though women were not allowed to vote at the time, the two suffragists found an influential politician to present their measure before the Legislature.

When the bill came to a vote in 1878, Foltz extended extraordinary effort to be present: She traveled alone overnight in the caboose of a cattle train to Sacramento without a dollar to her name, carrying only a bag of biscuits and boiled eggs for food, and surviving on nearly nothing while in Sacramento, even cooking food on a small alcohol lamp.

“The bill met with a storm of opposition such as had never been witnessed upon the floor of a California Senate,” Foltz wrote in her autobiography. Opponents said they feared that a female lawyer’s “seductive and persuasive arts” would sway juries. When they were lawyers, women would next demand to become jurors and even judges.

Others painted a picture of a female lawyer blushing and stammering when she had to cross-examine a witness on a sexual matter. The bill failed to pass initially. Assembly member Grove Johnson orchestrated a reconsideration of the Woman Lawyer’s Bill for the last day of March, two days before the end of the session. During discussion, Johnson presented supporting petitions, including one signed by nearly the entire Sacramento Bar, including judges.

The bill passed by two votes, with a final count of 37 to 35 on March 29, 1878. However, it appeared the bill was set to die on Governor William Irwin’s desk if he did not sign it by midnight April 1, 1878. Unwilling to give up, Foltz slipped past two guards, entered Governor Irwin’s office and persuaded him to sign before the pending midnight deadline.

Once the bill passed, Foltz began her studies to take the California bar exam. Despite a frenzy of publicity, Foltz passed a three-hour oral bar exam on September 4, 1878, to become California’s first female lawyer. The next day, Foltz was admitted to the California State Bar. Though press at the time reported Foltz as the third, and in some papers, the fifth female attorney in the United States, Foltz joined the ranks of nearly a few dozen female attorneys, as there were no official records at the time.

Though she was already practicing law and had prevailed in numerous cases, Foltz and fellow suffragist peer Gordon enrolled with their $10 registration fee at the University of California’s Hastings College of Law in San Francisco on January 9, 1879. The women were permitted to enroll and attend, but not allowed to stay more than a few days.

In class, when Foltz coughed, turned a page or moved her chair, her male classmates, not pleased by her presence, did the same in mimic. At the end of the third day, Foltz received a letter from the registrar dated January 10, 1879, informing her that the directors had “resolved not to admit women to the Law School.”

Foltz and Gordon attempted negotiations with the Founder and Dean of the Law School, Clinton Hastings, as well as several members of the board of directors. At the same time, they also attempted to attend classes, however, the male law students physically blocked the entrances. After several failed attempts to negotiate attendance, Foltz and Gordon separately filed suit against the law school; their suits were later joined, with Foltz as the named plaintiff.

In court, the law school’s attorney complimented Foltz on her grace and beauty, but said female lawyers were dangerous to justice because “an impartial jury would be impossible when a lovely lady pleaded the case of the criminal.” Broader education, he argued, “would make a woman less womanly” and thus “destroy our homes.” He contended that a feminine presence might be distracting to “serious male students.”

Foltz, arguing her own case, demanded that the school stick to arguing the law and not “woman’s sphere.” Foltz further stated to the court, “The knowledge of the law of our land will make women better mothers, better wives and better citizens.”

The judge agreed and the women prevailed; however, the law school appealed, during which time the women were denied admission. As Foltz prepared her appellate argument, she kept practicing law and lecturing about women’s rights.

As the matter was presented to the California Supreme Court, the attorney for the school argued, in part along with other arguments, that the 1868 act, which created the University of California and guaranteed women access, didn’t apply to the law school because of its special, independent (though affiliated) relationship with the University of California. The Supreme Court justices unanimously decided against the school in Foltz v. Hoge (1879).

By the time the law school finally permitted females to attend, Gordon had gone to law school elsewhere, and Foltz was too busy with her growing legal practice. Although she did not attend the law school, her achievement was monumental. While Foltz battled to open doors to law schools other than Hastings, the first woman to graduate from Hastings was Mary McHenry. In 1882, Foltz wrote McHenry a congratulations letter:

“[Y]ou scored one for your sex in carrying off the honor of an institutional that but recently scanted the idea of a women aspiring to be a lawyer… As a sort of mother of the institution [citing Foltz v. Hoge], I rejoice in your success.”

Foltz engaged a lengthy legal practice, one that was often on behalf of those who could not afford an attorney, as well as the underrepresented. During her practice, Foltz continually endured attacks due to her gender, to which she responded with wit and grace. For example, Foltz explained, “Counsel intimates with a curl on his lip that I am called the lady lawyer. I am sorry I cannot return the compliment, but I cannot. I never heard anybody call him any kind of a lawyer at all.”

Foltz’s accomplishments did not cease thereafter; she engaged in many firsts as a female in the law until her death on September 2, 1934, including: first woman to hold the position of clerk of the Judiciary Committee of the Assembly; first woman in America to serve two terms as deputy district attorney, a position she held in Los Angeles; founder of the California parole system; originator of the public defender system; the first female licensed notary public; and, in 1930, she unsuccessfully ran for governor of California at age 81.

Moreover, Foltz published a magazine from 1916 to 1918, entitled the New American Woman, to celebrate women professionals in which she wrote a monthly column entitled, “The Struggles and Triumphs of a Woman Lawyer.”

As Foltz continued in her career, important milestones aided in the growth of women’s rights. For example, women’s suffrage passed in California in 1911. Six years later, in 1917, a law was enacted allowing women on California juries. In 1920, the 19th Amendment to the U.S. Constitution was ratified, granting all women the right to vote. Having helped, in her own way, to pave the way, Foltz had the pleasure of witnessing these historic changes.

At the insistence of its women students, Hastings College of the Law granted Foltz a posthumous degree of Doctor of Laws in 1991. In 2002, the Criminal Courts Building in downtown Los Angeles was renamed the Clara Shortridge Foltz Criminal Justice Center, in honor of her hard work and dedication.

Despite her many accomplishments, Foltz noted at the end of her life that she viewed the Hastings lawsuit as her finest moment. Foltz was a true inspiration and a true leader setting forth the foundation for female attorneys in California today. s

How Did It Get So Late So Soon?

Attorney Beth W. Mora at MORA EMPLOYMENT LAW, is dedicated to representing victimized employees. She is a zealous and skilled advocate for those facing a wide range of employment law issues. Ms. Mora is committed to aggressively pursuing her clients’ best interests while treating each person she serves with integrity and compassion.